You’ve probably thought about becoming one of them Buddha-types at least once in your life, right?

You know the kind.

Those rare few who have escaped the wheel of suffering …

Always having deep-sounding things to say …

Giving you the feeling that …

Well, even if “awakening” isn’t one of your goals in life, I’ll be honest with you …

It certainly is one of mine.

I even thought of calling this website “Bipolar Buddha” before locking down on the “call a spade a spade” title of Self-Improvement Supercharger.

(I’m so glad I WOKE UP to what an ego-building story-trap “Bipolar Buddha” would have been! …

Way to go, Metivier. You dodged another bullet!)

In any case … it turns out there is such a thing as an enlightenment.

And I reckon that you’re probably longing for it too, even if you don’t yet know …

How Badly Your Brain Craves Happiness Beyond Thought!

Or won’t work with your perspective.

But here’s an epic suggestion:

Here’s What Enlightenment Means To “Me”

(Note: There’s an interesting guy who seems to dislike Gary Weber’s placement of quotations around the first-person pronoun. No comment – apart from the comment of doing it “myself” #egotrickster.)

3) Limited or even no thinking (As of day, I still feel that the absence of thought is a dimension of thought that requires cognition to occur more than its absence, but that’s just overthinking it … isn’t it? …

4) Enjoying that real deep satisfaction where you can look yourself or another person in the eyes and say without any B.S.:

Nothing can be added or taken away to make this moment that will make it better or more complete.

That at least is a working definition of enlightenment.

I’ve made it my goal to achieve this.

You might just say, that when it comes to self-improvement … I’m all in!

But when it comes down to the puzzle of total enlightenment, only one book has rocketed this outcome into my brain so quickly.

And I have to tell you …

It’s Utterly Stunning How Fast The
Obvious Omnipresence Of Enlightenment Reveals Itself!

But let me step back and tell you about the book that has hit me so hard since I picked it up.

Happiness Beyond Thought by Gary Weber.

I belong to a great community of people who write posts like the one you’re reading now.

And man are we ever serious.

I mean, of all the online groups I’ve belonged to, paid or unpaid, none have produced so many offline meetings and friendships.

I’ve met up with members in the odd UK pub, restaurants and parks in Madrid, other dog-infested parts of sob-story Spain, Oslo, Berlin, Vienna …

The list of people connected with SBO goes on around the globe, including my delightful new roost, Brisbane.

Which brings me to a discussion I had with Ben Fishel of the incredible Project Monkey Mind.

Disbelief has to go too. Just give me the data.

So with that requirement out of my mouth, Ben asks me if I’d read Gary Weber.

Nope. Never heard of the guy.

Well, you should, Ben says.

Because whoever it is that wrote Happiness Beyond Thought (he’s called Gary Weber) basically breaks enlightenment down to a materialistic and mathematical proposition that does not require belief.

Frankly, claims like that build the kind of curiosity-box I’ve just got to open …

But notice how nearly every single one of my requirements is addressed in the opening moves on the chess board of this presentation:

Back to my meeting with Ben …

We say goodbye, uncertain of whether or not we’ll ever meet again …

And a hop, skip and a jump later I’m home, on the Internet and I’ve got Happiness Beyond Thought on its merry way.

Then I read the book. Followed some of its practices.

And I really hope I’m not interpreting Happiness Beyond Thought to say what I want it to say.

Not that misinterpretation is always bad.

But I don’t want to delude that thing called “myself,” either!

And it’s definitely a matter of saying what I think all people need to hear in an honest and ethical way.

Here’s what impacted “me” so much from Happiness Beyond Thought.

It may have evolved for a reason.

The need for and use of gurus …

Weber seems to be asking:

Isn’t it possible chanting, for example, evolved because the very selection of sounds causes the tongue to touch the mouth in ways that trigger brain behaviors …

Brain behaviors that may be …

Impossible To Trigger In Any Other Way!

Why those moves and not others?

Could it be that a combination of conscious and unconscious testing procedures over centuries “selected” them as most likely to cause states of enlightenment?

(Oh, and Weber shared recently some interesting research that clarifies the role of gender when it comes to physical movement creating certain mental states, such as enlightenment).

Never one for yoga and chanting or many other personal development activities … the next thing you know, I’m all over this stuff.

Especially the exercise where you count every other number and practice something like repressing the rest to increase concentration. There are some good meditations on his site as well (I especially like the one called Opposites and Spaces).

Why try all these crazy things?

Because I/”I” Want To Be Free!

I/”I” want the sweet, non-judgmental, mental silence Weber talks about. It sounds too good to be true, which only makes me want it more.

For once in my life … sheer desire doesn’t chase the object of desire away.

It lands on me.

I Spent Two Weeks In Some Kind Of Twilight Zone!

In a state of shock, I was quite honest about it with my friends … perhaps too honest!

I said to myself and others more than a few times:

“If this is enlightenment … I don’t want it!”

When “the state” started to hit me …

It was like the sun opening up in my head.

The right side of my brain literally feels quite warm.

But I was feeling trapped in my flesh at the same time. Kind of like this sentiment by the famous Agent Smith:

And in that state, I spent hours painfully aware of the material planes of time …

… And how now that I could be free from thought, all I had left was time to sit around … waiting for it all to end.

Sounds Like A Lot Of Thinking And Misery … Doesn’t It?

Especially for a who supposedly just stepped into “happiness beyond thought.”

Well, I’m not entirely there yet, but here’s the thing:

As Gary Weber talks about, the disorientation passes.

Not only that, but it would be kind of suspicious if you didn’t experience.

But after the dark period, comes the light.

I don’t feel so disoriented or trapped in my flesh anymore.

If anything, it’s all flesh, including the air these lungs attached to the mouth beneath these eyes breathe.

Ha ha ha, that’s Buddha-grammar if ever these eyes read it, don’t you think?

Whoever “you” may be, Happiness Beyond Thought is a great book. “I” say read it!

An Exciting 2020 Update On Finding
Happiness Beyond Thought

Back when I published this post in 2017, I had no idea I would wind up giving a TEDx about my experiences reading this book.

When I was first invited to give this talk, I wrote a completely different presentation.

But something in my gut told me it was not a message worth spreading. The adventure I’d started when first reading Happiness Beyond Thought and all the things that have happened since certainly was, however. 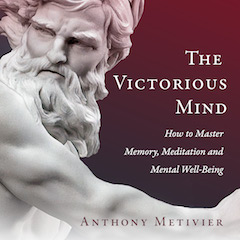 One of the greatest events is that Gary gave permission to use a hefty dose of his Sanskrit translations from Evolving Beyond Thought in my own book, The Victorious Mind: How to Master Memory, Meditation and Mental Well-Being. He even contributed his voice to the audiobook version.

We’re nearing the end of 2020 as I write this update, and I’m as delighted as ever from the results of following the practices in all the Gary Weber books I’ve read since.

I’ve also gone on to memorize even more of the Sanskrit phrases he supplies. Sometimes I take breaks, but I recite every single one of them every day.

Tips On Memorizing The Chants
In Happiness Beyond Thought

Strangely, I felt resistant to memorizing the text that wound up becoming my favorite: the Atma Shatakam (also called the Nirvana Shatakam).

I don’t know why I resisted it, but I find that the timing behind the when and why operates according to its own logic… or none at all.

In any case, the way I do it is simple:

There are more than one version of this text with two different endings. I found this one to go with the text as it appears in Happiness Beyond Thought:

To give you an idea of the imagery I choose, here’s the first section:

This roughly translates to:

I am not the mind, the intellect, the ego or the memory,
I am not the ears, the skin, the nose or the eyes,
I am not space, not earth, not fire, water or wind,
I am the form of consciousness and bliss

For “mano” I imagined Johnny Cash in a Memory Palace. That’s because he was often fondly referred to as “the man in black.” I saw him blowing smoke rings for the “o.” The meaning was already known to me, but if I needed to relate “mano” to “mind,” I might put Cash in a thinker’s pose.

I could go on and on with a syllable-by-syllable breakdown, but it’s really that easy and there are more instructions that essentially repeat that pattern in The Victorious Mind. You can also watch me recite and explain a ton of Sanskrit from the Ribhu Gita if you wish:

I keep meaning to ask Gary if there’s a way I can volunteer to fund a narrator to read the book or do it myself. So far I haven’t, but in some ways, I think he’s right to keep it exclusive as a book you read. It’s a textbook, something you work with and revisit.

I’ve revisited it often since 2017, most particularly because so much of it has been installed in memory. I can only recommend you do the same.

More Powerful Side Effects Of These
Non Dual Meditations

In addition to everything reported in the initial post, there has been a noticeable deepening of the effects of not having a self.

Yet, I do still experience one and thoughts are still involved. They just simply aren’t invasive thoughts that drive me nuts anymore.

Plus, the ego is experienced more like a mechanism… the way a flower might experience its own petal. It does its thing while “i” sit back and enjoy the show.

And if I fall off the horse, working daily with the meditations has trained my procedural memory to get back on it very quickly. It’s quite astonishing and amusing to behold.

I wish I could promise this book will serve as a powerful catalyst for you as it did for me. But at the end of the day, I think the real lesson is that all of us already have what we seek: we are consciousness experiencing itself.

If I’ve learned anything, it’s really just to notice exactly what the spiritual traditions always say:

16 thoughts on “Happiness Beyond Thought: The Most Important Self Help Book?”